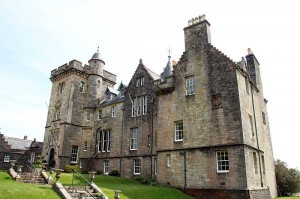 It seems that we had quite a bit of luck when we arrived on the Isle of Mull in May this year in our hired Motorhome. It was a hot day and our first destination was Torosay Castle just south of Craignure where we arrived on the ferry from Oban. We arrived on the parking place of the castle which was deserted, we were the only ones around. When we walked up to the castle there was a sign on the gate mentioning that the gardens were open, the castle itself was closed. I assumed the castle would open later in the season but upon my return I checked their website and I saw that the closure of the castle seemed to be a permanent one. There was an honesty box for the entrance fee which we filled when we left but not after we had a marvellous stroll around the gardens while our daughter tested the excellent children’s playground.

About the Castle: Torosay Castle was completed in 1858 by the eminent Architect David Bryce in the Scottish Baronial style. It is one of the finer examples of his work and possibly one of the few still used as a family home and open to the public. Torosay is surrounded by 12 acres of spectacular gardens including formal terraces (attributed to Sir Robert Lorimar) which are covered with roses, other climbers and underplanted with perennials. Also in the gardens is an impressive statue walk which consists of 19 lifesize limestone figures which were sculpted by Antonio Bonazza. These statues originate from a deserted Italian villa near Padua and were brought to Torosay in about 1900.

When I visited their website again today I found out that not only the castle but the gardens are now closed as well. The website states: “missives have been concluded for the sale of torosay castle. The castle and gardens are now closed to the public.” I’m not sure what the future will bring for this hidden gem, we can only hope that it will be reopened for the public at some point in the future. All I can offer now are visual memories of a memorable Torosay Castle visit in May this year.