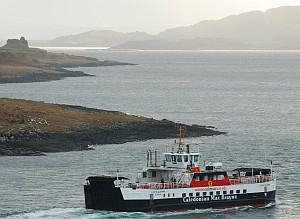 Your Hebridean journey most likely starts on board one of Caledonian MacBrayne’s ferries, the sole operator of the most ferry routes in the west of Scotland. Caledonian MacBrayne or Calmac, operates a life line ferry service between the mainland of Scotland and the islands of the Inner and Outer Hebrides. If you are planning to visit more than one island make sure to check if you can save money by buying an Island Rover, Island Hopscotch or Whisky Hopscotch ticket. Also be advised that tickets to Coll and Tiree from Oban are relatively cheaper than tickets to the other islands. The Isle of Coll and Tiree participate in the RET scheme which allows ticket fares based on a Road Equivalent Tariff (RET). For more information on RET read the following story.

If we take Oban as the start of our Hebridean journey there are several islands within reach, the most obvious is Mull, the most northern island of the Southern Hebrides. Oban offers regular sailings to Craignure, which takes around 40 minutes. There are also ferries running between Fishnish and Lochaline in Morvern (15 minutes) and from Tobermory to Kilchoan on the Ardnamurchan peninsula (35 minutes). Ardnamurchan Point, on the tip of that peninsula, is the western most point on the British mainland. Other islands accessible from Oban are Coll, to the west of Mull, which takes around 2 hours 55 minutes, with a further hour between to its smaller neighbour, Tiree.

From Mull there are three more possibilities and one of the most favoured would have to be Iona. It’s a small island, but well over 100,000 people make their way there each year in a pilgrimage to the abbey, following in the footsteps of those that have followed the same journey, albeit with different forms of transport, for around 1500 years. Other islands around Mull can be visited including Ulva and the world famous Staffa, although sailing to the latter, let alone setting foot on the island, is dependant upon the weather!

Oban is not without reason classified as the main hub to the Inner and Outer Hebrides. Apart from Mull, Coll and Tiree Oban is also gateway to Colonsay, to the south of Mull, with this trip taking around 2 hours and 20 minutes. Colonsay is attached to its neighbour Oronsay at low tide, so a ferry is not required there, but on a Wednesday the ferry service continues to Port Askaig on Islay, taking just over 2 hours to reach the larger island further south! From Islay it is possible to take a council operated ferry to Jura from Port Askaig, which takes 10 minutes, or to continue back to the mainland. This last option can be taken from Port Askaig on a Wednesday, completing the hop from Oban or from Port Ellen, with either journey taking approximately 2 hours 20 minutes to Kennacraig at the northern end of the Kintyre peninsula, otherwise known as the Mainland Island.

The Isle of Gigha is only accessible from Tayinloan on Kintyre and the journey takes 30 minutes. The ferry carries both Passengers and their cars. From the northern part of Argyll, at Tayvallich, the summer only passenger ferry links to the Isle of Jura. Further north from the road to Oban another island can be visited by crossing a bridge over the Atlantic Ocean to the Isle of Seil. A trip to Seil allows access to two more islands, Luing to the south of Seil and Easdale to the west. The former and larger of the two has a car ferry, while the latter is accessed by a small boat. Just make sure you have money with you as the ferry man collects the fares on the return trip!

Isle of Arran Ferry in the Sound of Islay

There are many more islands in the Southern Hebrides without ferry access like the Garvellachs, Treshnish islands, Texa and Scarba. These islands are unpopulated but that doesn’t make them less interesting. Some of them are a sanctuary for birds and other wildlife and most of them contain evidence of population in earlier days. Often private charters can be hired from the larger islands close by to get access to these islands, weather permitting.

Below an overview of Ferry Ports in the Southern Hebrides and their destinations including a link to the current schedule:

Air Services to and in the Inner Hebrides

Regular scheduled flights to the bigger airports in the Inner Hebrides are operated by Flybe and leave from Glasgow International Airport. Flybe operates services from Glasgow to Oban, Glasgow to Islay and Glasgow to Tiree. To book or search flights visit www.flybe.com

Islay and Tiree Airports are operated Highland and Islands Airports while Argyll and Bute Council operates Oban Airport, Coll, Colonsay and Glenforsa Aerodromes on Mull (only by prior arrangement)

Ferry Video
Below a video of the ferry journey from Kennacraig, Argyll, on the mainland of Scotland, to Port Ellen Isle of Islay on board the Isle of Arran Calmac Ferry. The video has music from the Sheena Swanson Quartet from their CD Holiday on Islay.