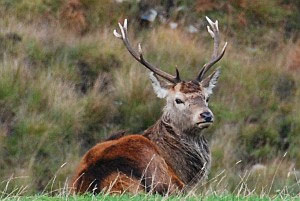 The name Jura is believed to come from the Norse meaning ‘Deer Island’ although it is also said that Jura got it’s name from an earlier language. In Gaelic the word ‘diura’ itself means ‘tough, or durable’. Early writers speak of a few herds of deer numbering about 300, but the present day population is about 7,000. Meeting any of these majestic animals is likely while peace, isolation and tranquility are other attractions of this remote and wild island. Jura is sparsely populated and is currently inhabited by a little over 200 people. The main settlement is Craighouse on the east coast, in fact almost all the people live on the south and east coast. The west of the island is hard to access but offer some of the finest raised beaches in the world. The only road on the island, single track all the way, starts at the ferry terminal near Feolin. On the opposite side of the Sound of Islay, the narrow strait with its fast currents, is Port Askaig Islay, a car and passenger ferry links both. The road ends in the north of Jura, near Barnhill.

Barnhill is also known for the cottage where Eric Blair, better known as George Orwell, lived from 1946-48 while writing his novel 1984. Orwell had first visited the island in 1945 and had an almost fatal encounter in the Gulf of Corryvreckan that separates Jura from the smaller island of Scarba to the north. The Corryvreckan Whirlpool as it is called is caused by an underwater mountain reaching almost to the surface of the strait causing the whirlpool to activate when the tides change. Especially with a strong westerly wind and upcoming tide the whirlpool is best visible. Jura Hotel runs Landrover trips from Craighouse to Kinuachdrach.

Craighouse seen from the Stone Pier

Jura is ideal for walking and the visitor has almost unlimited freedom to walk almost everywhere and climb the Paps of Jura, visit the Wild west coast with it’s amazing wildlife or visit the Corryvreckan Whirlpool in the north. These are all tough hard walks. If you wish to walk during the stalking season, please check with the gamekeepers concerned. The main stalking season is from August to the end of October.

A Bit of Jura History

From a historical point of view one can say that Jura’s history is in many ways similar to the other islands of the Hebrides. At some point the Norseman ruled the island from the Isle of Man until Somerled, whose steady rise to power in the Hebrides was cemented in the famous sea-battle of 1156 of Islay, ended Norse power in the Hebrides. Somerled’s descendants, named Clan Donald, and more commonly known to history as the “Lords of the Isles” grew to control all of the west coast and parts of north Scotland. In 1506 the Treaty of Camus an Staca took away all MacDonald rights to land and power on Jura and gave them to a cadet branch of the House of Campbell. The Macleans in the meanwhile constantly strove to keep the Campbells out of north Jura. The island entered an era in which it was controlled for a longer period by the Campbell Clan in the early 1600s from which 11 lairds ruled the island. When explorer Martin Martin visited the Isle of Jura in 1703 he wrote an interesting account of the island and its people. According to explorer Thomas Pennant, who visited Jura twenty years later, the island “carried a fairly large population right through the period of Campbell domination into the era of emigration and clearance.” The Campbell dominance lasted until 1938 when Charles Campbell, the last Laird of Jura, sold the remaining parts of the Jura Estate and houses.

The Paps of Jura

Dominating the view of Jura from almost any direction are the three, distinctive and easily recognised, Paps of Jura found in the southern half of the island. The highest of the three is Beinn an Oir, the Mountain of Gold, is 785m/2576 ft is the only Corbett, a mountain in Scotland between 2500 and 3000 ft. Beinn Shiantaidh, the Sacred Mountain, is 757m/2477 ft and stands to the east of Beinn an Oir, while Beinn a’ Chaolais, the Mountain of the Sound, stands to the south-west and is the smallest of the three at 734m/2407 ft. Cora Bheinn, the steep mountain, stands at a height of 569 m/1893 ft to the north-east of Beinn Shiantaidh and, while not considered to be one of the Paps, is part of the same group of mountains. On one of the Paps remains of a checkpoint from the second world war can be found.

There is a commanding view to be obtained from the top of the Paps on a clear day and it is well worth the effort of climbing one of them, if the weather is settled. To the north is Loch Tarbert, the northern half of Jura, the Garvellachs and Mull. to the Northwest is Colonsay, to the east, the whole of Kintyre with Arran beyond, Ben Lomond and the Cobbler. To the south the Isle of Islay and Northern Ireland. Like Ben More on Mull, the Paps of Jura are visible from almost every other island in the Southern Hebrides.

Jura House, which is located at the southern end of the island, was built around 1880 by the Campbell’s of Jura. The House itself can not be visited and is actually only visible from the ferry between Kennacraig and Port Askaig on Islay. The walled garden was created in the early part of the 19th century and acted as a kitchen garden to the house. The garden is closed to the public. There are a couple of small islands situated off the southern coast of Jura, Am Fraoch Eilean to the south-west of Jura House and Brosdale Island to the south-east. On the first of these are the remains of Claig Castle, one of the sea fortresses that were used by by the Lords of the Isles to control traffic in the seas around the Hebridean islands.

Jura and the Sound of Islay seen from Bunnahabhain

Red Deer are Jura’s trademark and they can be found almost anywhere on the island, often in groups, specially in the autum when it’s time for the rut. When the roars of the stags echo through the hills you get a true sense for this magnificent island. Other wildlife includes otters, buzzards, hen harriers, golden eagles and many other song birds, depending on the habitat in which you are. Jura has many habitats such as woodland, bogs, heather, grassland, coastal bays, shingle and sandy (raised) beaches and many miles of unspoilt mountain area.

Jura has no airport as such, merely a landing strip for emergencies in the north. Year round (vehicle) access to the island will require a visit to the neighbouring Isle of Islay where a regular ferry connects Port Askaig with Feolin. The ferry runs at approx 30min intervals daily from 7.30am till 6.30pm. Booking is not required, a stop at the local petrol station in Port Askaig however is recommended if travelling by car. A passenger ferry is operated in the summer season only between Tayvallich on the Kintyre mainland and Craighouse on Jura. A bus service connects Feolin with Inverlussa and Ardlussa in the north.