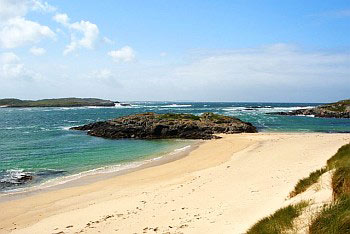 The Isle of Coll is a Southern Hebridean island lying about four miles west of Mull. It extends approximately thirteen miles in length and is about four miles across at it’s widest point. Coll is fairly central in the coastal chain of Hebridean islands, and breathtaking views of surrounding islands can be seen from many points on Coll’s shores. The Outer Hebridean isles of Barra and South Uist are often visible to the northwest, the islands of Rum, Eigg, Muck and Skye can be seen to the north, Mull, the Treshnish Isles and the Paps of Jura to the southeast and nearby Gunna and Tiree lie to the southwest. These varied islands all make dramatic backdrops to Coll’s flower-filled machairs and sparkling white shell-sand beaches.

Arinagour, Coll’s main village, lies on the west side of loch Eathearna, and about half the population lives there. The pier, build in 1967, is the landing point for Caledonian MacBraynes’ ferry crossing linking with Oban and Tiree. The road to the township of Breachacha runs inland along an attractive deeply-bayed coastline. Coll currently has a population of around 200 all-year residents.

There are lots of outdoors adventures to enjoy on Coll. Play golf on the island’s scenic nine-hole course; swim, surf or body-board in the sea (ask locals where it’s safe); fish or walk or pony-trek with Lochoir Highland Pony Stud and Pony Trekking along miles of white sandy beaches or rugged cliff tops. Cyclists can bring their bikes or hire one here, and tour around the island’s circular main road. There’s a campsite, too.

Cliad beach is a great place to watch the seals, or walk along Caolas beach and from higher land, look down into the sea and try to spot basking sharks, minke whales or dolphins. With luck, in summer you may hear (CREX CREX!) or even see Coll’s most famous bird, the Corncrake. The RSPB has a bird reserve on Coll where efforts are made to help protect it, and many farmers and crofters have changed their silage-making methods to be more Corncrake-friendly.
Coll is great for outdoor family holidays, and has a children’s playground in Arinagour, the main village Location. Of course, care must be taken near, in or on the sea, and some beaches on the island should be avoided for paddling, swimming or other water sports as they are known for their strong rip tides. Ask the locals to recommend a safe beach. 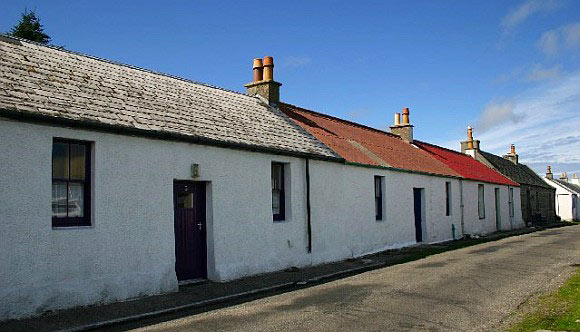 Of interest on Coll to younger children and their families will be guessing the settings of the popular Katie Morag series of books written by Mairi Hedderwick. Mairi was born in Gourock, but has lived on Coll for many years. Her delightful children’s books are stories of childhood and village life on the fictional island of ‘struay’ which is based on the island of Coll.

Coll has a general store, Island Stores, and a Post Office, The only cash machine is inside the village Post Office and is available only during the opening hours of the Post Office. Also in Arinagour is a petrol/diesel station and some gift shops, see shopping and artisans to see the work of talented Coll artists. A doctor (GP) and nurse are resident, and the Emergency Services are a volunteer firefighting team and a coastguard team. Coll has two churches, both are in Arinagour. A taxi service is available; contact Val on 01879 230402 to book.

Weather is always of intense interest to islanders and visitors, as almost all activities for work or pleasure come under its influence. Tiree, the next-door island to Coll, is recorded annually as being the sunniest place in Britain. People living on Coll say that the weather is usually even better there, and that this ‘record’ is only due to there being an official weather recording station on Tiree, while Coll doesn’t have one. Being a low-lying island out in the Atlantic, it has to be said that Coll is quite a windy place, but at least all that movement of fresh air usually keeps the midges away in summer. Rain often passes Coll by, falling on the nearby higher hills of Mull, Ardnamurchan and Rum. The island often enjoys clear blue skies, whilst around the panorama of islands and mainland hills heavy clouds can be seen over the peaks. As with most Hebridean islands, national television weather forecasts have little relevance to Coll, and all native Collachs are weather ‘experts’!

The early history of Coll is similar to the rest of the Southern Hebrides; Mesolithic hunter-gatherer camps followed by Neolithic farmers. Later, Gaels and Norse settlers arrived, themselves followed by the rule of Somerled and Clan Donald’s Lordship of the Isles. At the break-up of the MacDonald’s Lordship, Coll was secured by the MacLeans of Mull. Breachacha castle on the shore of Loch Breachacha was thought to have been the seat of the MacLeans and part of the defences of the Lordship of the Isles, but recent excavations suggest a 15th century construction. The castle is a good example of a Medieval fortress, and has been little altered. A newer castle was constructed nearby in 1750 by Hector MacLean, and this was visited by Boswell and Johnson on their tour of the Hebrides in October 1773. Boswell and Johnson were entertained there by Coll’s last hereditary piper to the MacLeans, but having been confined to the building by gales, they seem not to have enjoyed their visit.

After a gory battle in 1593 between the MacLeans of Coll and invading MacLeans of Duart, Mull, the burn flowing into Loch Breachacha was said to have been full of bloody decapitated Duart heads. Since then, the burn has been called Struthan nan Ceann, meaning the Stream of the Heads. The 19th century history of Coll relates the same sad events which took place on many Hebridean islands. By the year 1841 Coll’s population had risen to 1440 inhabitants, and the Laird, MacLean, was unable or unwilling to manage the land to support such numbers. In the following years MacLean and the potato famine together caused the Clearances, when nearly half of Coll’s people were put off the land and transported to Australia and Canada. Further emigrations by young people decimated the island population, until Coll was almost uninhabited, with no longer enough younger people living there to keep a viable community and to work the land.

In 1858, MacLean sold Coll to the Stewarts, and the Coll lands are now owned by a Trust, the RSPB, indivicual farmers and crofters. And Nicholas Maclean-Bristol, who lives in Breacachadh Castle. Documents relating to the Clan MacLean of Coll can be accessed at the National Archives of Scotland.

The people of Coll

Today’s people of Coll, about two hundred permanent residents, are mostly farmers or crofters, raising cattle and sheep. There is also a small-boat lobster fishing fleet. An interesting article appeared in the Oban Times by Moira Kerr about the Isle of Coll population explosion in which you can read that it was one family in particular that contributed to the increase in the islands population. Read the full story on the blog.

Visiting the Isle of Coll 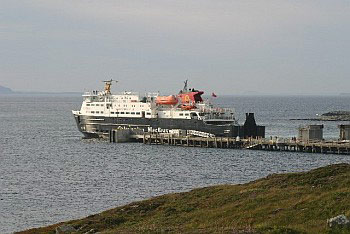 Most visitors travel to Coll by Caledonian MacBrayne ferry. Please remember that buying a ticket does not automatically give you a reservation on sailings for your car. When buying your car ticket, make sure that you have booked for the sailing(s) you wish to use. Check the ferry travel page for more info and schedules.

The journey to Coll from Oban takes between 2.5 and 3 hours, depending on the vessel in service. The crossing to Coll itself is a beautiful passage; steaming down the Sound of Mull past the port village of Tobermory, then passing south of Ardnamurchan Point, the most westerly tip of the UK’s mainland. Finally a short crossing in more open sea, then into Loch Eatharna up to Arinagour village in Coll. In summer there are good chances of spotting dolphins, porpoises, basking sharks and whales from the ferry’s deck while enroute. You may see shearwaters, guillemots and petrels and if your birder’s luck in really in, perhaps a White-tailed Sea Eagle.

Travelling with a vehicle between Coll and Tiree, Coll and Barra or Tiree and Barra you will need to reverse your vehicle onto the ferry, even if you are towing a trailer. Drivers must be able to do so, and practice before travel is advised.

The Isle of Coll airstrip is situated at the western end of Coll. Scheduled flights are run by Highland Airways Click for Coll’s flight Timetable on Mondays and Wednesdays, with additional flights for High School pupils returning home at weekends. Times vary throughout the year, and Highland Airways website does not always show up-to-date flight times (particularly autumn, spring and winter) so it’s advisable to telephone before you travel. Seats are available to the general public on the return legs of High School pupils’ ‘scholar flights’, and these are often at reduced prices. Coll’s runway is unlit, as are runways on other islands, and flying may be limited by visibility. Ticket can be booked at www.highlandairways.co.uk

Light planes and helicopters often come to Coll, landing at the new airstrip or the helipad near the airstrip. There are no facilities at the airstrip, other than a payphone. A private helipad is available in the Coll Hotel’s gardens for the use of hotel guests. Landings by prior arrangements with the hotel on 01879 230334.

Alternatively, Coll can be reached by private steam or sail. Arinagour is an increasingly popular anchorage for yachtsmen, the fresh local seafood cuisine being one of the attractions. Boat charter is available in Tobermory or Tiree. A few adventurers come to Coll by sea kayak, but that’s only for expeditions by the very experienced.