Although the Southern Hebridean Isle of Iona is only 3 miles long and 1.5 miles wide, its places of interest and historical significance far out-distances its compact geography. While traces of early human occupation have been found on Iona; hand-worked flint flakes and tools, Bronze Age burials and an Iron Age dun (hill fort), it is for the early Christian Saint Columba and his works that the island is best known.

After visting Islay and Oronsay on his way north from his native Ireland, Columba arrived in Iona in 563 AD. Columba, or in Irish Gaelic, Colum Cille, Dove of the Church, was born in 521 AD, a prince of royal blood in Ireland and grandson of the Irish High King Niall. However, Columba, a skilled scribe as a young man, fell foul of the ruling powers concerning the copyright of a book. Columba reputedly had a fiery temper and, in a time when a book was a rare item held in high esteem as the most valuable of possessions, he refused to accept judgement and hand over the copy of the Psalter of St Jerome which he had illicitly made. Traditionally, King Diarmaid’s judgement to establish the copyright was ‘to the cow, her calf, to the book its little book.’

Columba’s refusal to give up the book led to his raising an army and in 561AD fought a pitched battle in which his warrior family prevailed. It is said that 10,000 souls were lost in the ensuing Battle of Cuil Dremhne. Then, remorseful for the deaths his defiance had caused, Columba and his followers fled into exile. They finally settled on the Isle of Iona, as the first place in his journey from where he was unable to see the shores of his native Ireland. By 500 AD the Irish Scotii clan Ui Neill were sailing their curraghs to trade and settle on part of Scotland’s west coast which they called Dalriada, “Portion of land of Riada” after their homeland in Ireland’s Antrim Glens. According to Ptolemy’s ancient maps, the Epidii, the Horse Tribe, were then living in what is now called Argyll and Kintyre. Nowadays, we call this area Earra Ghàidheal, Argyll, the Coastline of the Gael.

In 563, with his twelve companions Columba set about building Iona’s first church, made of clay and wood construction. It was written that Columba had great physical and mental strength, had experienced thorough religious training and had become a persuasive speaker with the ‘human touch’. He was greatly beloved, if a little feared, by his increasing numbers of followers. Columba brought his abilities to bear on all he met in his extensive travels and ministry, with the result that Scotland at the time and for long after began to adhere to Christianity.

Nothing of Columba’s original abbey or settlement buildings now exist on Iona. However, to the left side of the Abbey entrance a small roofed chamber can be seen, and this is believed to be the site of Saint Columba’s tomb. Columba died on Iona on 9th June, 597AD. St Columba’s biography was written a century after his death by the Irish monk who became Saint Adòmnan. Adòmnan died in 702AD, having been made Abbot of Iona in 679. An annotated ‘Life of St Columba’ by Adòmnan of Iona was published in 1995 by Penguin Classics in paperback.

About hundred and thirty-five people live on Iona permanently, all year round. Some families have been here for many generations, whilst others have arrived recently to build a life on the island. Work on Iona is divided between crofting, raising cattle and sheep, and tourism-related jobs in catering, accommodation provision, and tour-guiding on land and by sea. Also, a number of craftspeople make unique, individually designed goods for sale in Iona’s shops and galleries. The population is boosted to around three hundred in summer, as people take up summer jobs or volunteer placements in the Iona Community. Iona’s primary school has around twenty children enrolled. For secondary education, pupils go to Oban High School, and stay as weekly boarders in the Oban school hostel.

Within the local community of Iona there is the interfaith Iona Community founded in 1938 by the Reverend George MacLeod of Fiunary. The Iona Community describes itself as ‘an ecumenical Christian community of men and women from different walks of life and different traditions in the Christian church’.
The membership of the Community comes from within the UK and abroad, and maintain resident staff living and working on Iona, supplemented by seasonal or longer term volunteers. Individuals and groups share in work and worship at the Community’s centres on Iona. The Abbey and The MacLeod Centre are staffed by the Iona Community, as is Camas, their outdoor adventure centre on nearby Mull.

Features and places to visit:

The island of Iona is now owned by the National Trust for Scotland. The island was given to the National Trust in 1979 by the Fraser Foundation in memory of Lord Hugh Fraser of Allander. The Fraser Foundation had purchased Iona from the Duke of Argyll. On the way to Iona, visitors may wish to explore the Saint Columba Welcome and Exhibition Centre in Fionnphort, Isle of Mull, near the departure point of the Iona ferry. The Centre was opened in 1997 during the commemorations of the 1400th anniversary of Columba’s death, and the exhibition is run by Historic Scotland. The Saint Columba Centre at Fionnphort is not open at present. Access may be arranged through Iona Abbey on 01681 700512. Staff explained that the Saint Columba Centre is expected to be closed at least until the autumn of 2009.

Next to the school on the way from the pier to the Abbey are the 13th century ruins of Iona’s Nunnery. The colourful gardens offer the visitor a pleasant introduction to Iona’s historic sites.

Camas Cuil an t-Siamh – Bay at the back of the ocean. Treshnish Isles in the distance.

Iona Abbey church was substantially expanded in the fifteenth century. During and after the Scottish Reformation the abbey was dismantled and abandoned, their monks and Libraries were dispersed. The Duke of Argyll transferred ownership of the ruined remains of the Abbey and Nunnery sites to the Iona Cathedral Trust in 1899. The Cathedral Trust undertook extensive restoration of the Abbey church. 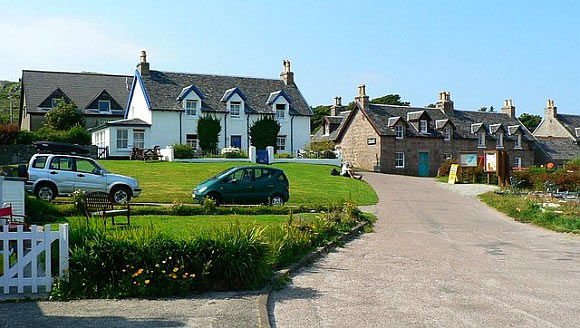 There are several good craft/gift shops such as The Iona Gallery and Pottery. Also visit Aosdana for Celtic-style Iona silver jewellery, and the Oran creative crafts co-opererative in the Columba Steadings opposite the Columba Hotel.

Ferries to the Isle of Mull depart from Oban, and also from Lochaline and Kilchoan on the Ardnamurchan peninsula. There are regular buses from Craignure on the east coast of Mull, connecting with the ferries arriving from and departing to Oban on the mainland. The passenger-only ferry to Iona departs from the village of Fionnphort in southwest Mull. Only permanent residents may bring a car onto Iona. Caledonian MacBrayne operates a small foot-passenger ferry between Iona and Fionnphort on the southwestern tip of the Isle of Mull. It runs back and forth throughout the day, and the crossing takes 5 minutes. The cost of a return ticket is around £5.20 GBP. Bicycles are carried free. Information on ferries, schedules and routes is available from the ferry travel page

Visitors’ cars are not allowed onto Iona, but if you are unable to walk the quarter of a mile to the Abbey, you can hire a taxi to collect you at the ferry. Contact Lindsay and Joyce McIntyre – telephone 01681 700776 or 0781 032 5990 – advance booking is essential. They also have a couple of electric bikes for hire. For more info visit this link

Throughout the spring and summer season there are daily coach-and-ferry day-trips to Mull, Iona, Staffa and the Treshnish Isles from Oban. You can also get a boat trip to Staffa direct from Iona. 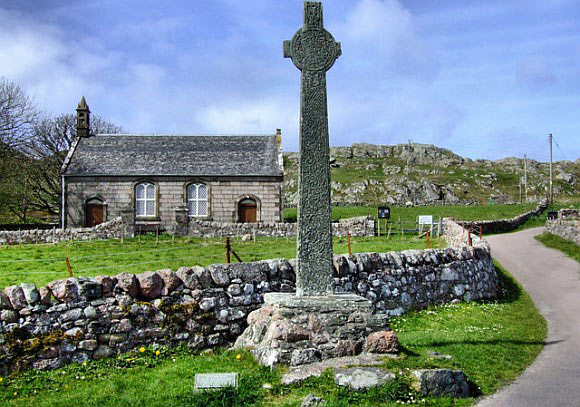 This tall free-standing cross was probably erected in the fifteenth century. The solid wheel-head depicts the Crucifixion. The broad faces are carved with an interlace pattern continuing the Celtic tradition. The church in the background is Iona Parish Church built in 1828. It was one of 32 “Parliamentary Churches” (so named because they were paid for with funds voted by Parliament) built across the Highlands and Islands to a standard design produced by the engineer Thomas Telford for a T-shaped church and an accompanying manse.