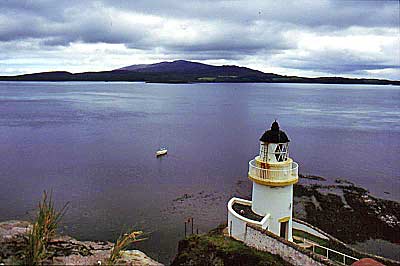 The lovely story below was written by Robert Holden and appeared in the Ileach of 16 July. Robert: I have worn several ‘business’ hats in my Islay life. Nothing like as many as my friend Seumas (I always called him Mr) MacSporran who sported fourteen while living on Gigha – and all at the same time! – but my last regular contact with Islay was as skipper of a yacht doing charters pretty well all around the Hebrides; a magnificent, delightful, challenging, and sometimes even frightening job of work. A surprising number of clients must have enjoyed it, as so many of them came back year after year, and one question nearly everybody asked was “What is your favourite anchorage?”, and very difficult to answer. I think we got it whittled down to a ‘Top Ten’: places like Acarsaid Mhor on South Rona, Fladday Harbour at the north of Raasay, Loch Spelve on Mull, Outer Oitir Bay on Kerrera, Tinker’s Hole on Earraid, Scalpay Harbour, Eriskay, Loch Scavaig on Skye; even Village Bay St. Kilda. Favourites varied depending on how perfect the weather was for different friends, but always included were Bagh Gleann na Muc in the Corryvreckan, Ardmore Islets on the north-east corner of Islay, and West Loch Tarbert, Jura.

Always for me the last two mentioned were very near to the top of the list, and one cruise to Ardmore with a family party of five was quite memorable. Leaving Crinan the weather was perfect, and with a light westerly breeze Ailsa, eldest daughter of the family and all of seven years (roughly), competently took the tiller for a spell reaching down the Sound of Jura. I shouldn’t have been surprised as her mother is a Shetlander. She took a keen interest in passing sea-birds, so I got her to make a list and identify each one as we coasted along. At the end of the day I asked her what the score was. “Fourteen, if you count goats and jellyfish!” she told me.

Entering the Ardmore Island environment is tricky, with islets and rocks all over the place, but nosing your way in gently you can find lovely wee corners, sheltered from wind and sea in any direction. The adult seals are quite confiding, and the pups leap like salmon around the boat. Ducks and cormorants perch or cruise about contentedly, and very often a herd of fallow deer graze round the shore. And on this occasion, we had just dropped anchor close up to a rock and were letting Harmony drop back on her chain when an otter climbed on to the rock with a big fish and chewed away at it, ignoring us completely. Beautiful, just, and I don’t think Plod nan Sgeirean ever disappointed anybody. As a bonus, Kildalton Cross is within walking/scrambling distance; approaching it from the sea is somehow more of an adventure, and much more satisfying than driving to it by road.

On this particular trip we went onwards the next day, through the Sound of Islay to West Loch Tarbert, Jura, and the kids –and their parents- were gobsmacked by that wild and wonderful corner of Jura, with it’s spectacular raised beaches, and waterfalls (one in particular which we used to refer to as the shower room!) and deer, and goats that made Billy Goat Gruff look like a cissy. Curiously, and a little sadly, last year Ailsa –now married- and her husband spent a few days on Jura expressly so that she could show him the places that so bewitched her as a child (especially West Loch Tarbert, Jura) but they were barred ‘because of the shooters’; I felt her disappointment when she told me.

The West Loch is wide, and open, narrowing gradually as it cuts inland to almost cut Jura in two, and from it’s head it is only about a mile overland before you hit the east shore. It is full of nooks and bays, and intriguing corners to anchor in; and quite nasty rocks, but Lord Astor many years ago had several sets of leading marks built on land which lead you all the way in through both sets of narrows, or ‘doors’. Just inside the second narrows, is a sublime little bay that I love, which is totally sheltered from anything the sea can throw at you, and you can sleep as soundly as in bed at home. The bottom is soft mud which stinks a bit, and that got me once when we were setting off in the morning, for after weighing the anchor Harmony refused to move, perfectly upright but her keel lovingly clasped by the mud, and the crew said what next? So I suggested morning coffee, and by the time we had enjoyed that the rising tide persuaded the bottom to let us go, and off we went.

One truly memorable happening in that corner, was when we had just arrived and anchored with some friends, and Alison announced that “This is our thirtieth wedding anniversary!” and produced a card for Eric; and a bottle of champagne. So in warm sunshine we sat in the cockpit and toasted them, and Alison, a keen bird-watcher said “It’s a pity there are no birds to see here”, at which I pointed to the cliff at the narrows and said a pair of peregrine falcons lived there: at this the two birds took of and circled above us, on cue. Then a pair of hen harriers suddenly appeared a couple of hundred feet above them, also circling, the male especially spectacular in his black and white livery. “It just can’t get any better than this!” said Alison, leaning back and absorbing the scene. “It just has, look!” I said, as two golden eagles drifted into sight, and joined the circling column a few hundred feet higher. So we felt we had to toast the birds as well, which we did, with a handy bottle of liquid Chilean sunshine. A memorable encounter, in one of my favourite anchorages: over in a few short moments, but never forgotten.

Probably the most exciting anchorage to visit on the two islands is ‘The bay of the glen of pigs’ in the Corryvreckan: only to be entered at slack water, or with a slight ebb tide running against you. And if the flood tide is running you don’t come out until it’s over! But to sit quietly and calmly at anchor, by an open beach of white sand, surrounded by deer-populated hills and goat- populated cliffs, and see and hear the flood tide going past like a train, is quite spectacular. We would spend the night there occasionally, if next morning the tidal state let you out at a time to go where and when it suited you, but if not it was always a coveted stop by charterers. Once we had a short break there and watched the Waverley pass through westwards, towards Iona.

Undoubtedly, the west coast of Scotland to me is the best sailing area in the world, with its islands, and sounds, and hundreds of anchorages, each with it’s own personality, and delights peculiar to itself. If I was ever pressed on my favourite anchorage anywhere in the Western Isles I would never expressly name one. There are literally dozens of desirable corners around where I loved to drop the hook but I could never leave West Loch Tarbert, Jura out. Is that an answer?

Welcome to the Southern Hebrides website. Here you can enjoy a virtual tour through one of the most beautiful areas in Scotland. You can also navigate the site using our Interactive map

Stay in touch with us